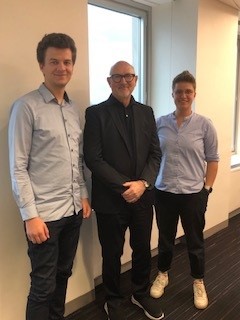 The Pension Boards was pleased to host Ms. Anna-Nicole Heinrich, the President of the Synod of the Evangelical Church of Germany (EKD), and Executive Assistant, Jonathan Renau, in their New York offices recently.

Elected in 2021, Ms. Heinrich, at 26, is the youngest person to hold the office in the history of the EKD. “As president of the EKD Synod, I stand for a hopeful, integrating, and pragmatic church that is always reviving itself,” she said in her introductory speech upon her election. Previously a youth delegate to the synod, she studied philosophy at the University of Regensburg and is vice-chair of the Protestant Youth in Germany.

“The election of Anna-Nicole Heinrich for such an important position is not only a sign of recognition of her ability and experience but also a strong testimony to the understanding of the role of young leaders in the church,” said Rev. Dr. Ireneusz Lukas, Regional Secretary for Europe at The Lutheran World Federation (LWF).

In his presentation, Rick Walters elaborated on how the Pension Boards arrived at the concept of the “intersection of faith and finance” as “an expression of our basic values,” and ultimately detailed in the 2022 Sustainability Report. Ms. Heinrich asked several questions related to sustainable investing and observed that in the EKD, “there is considerable interest in sustainable investment, but it isn’t connected to the faith dimension.”

Concluding the visit, Ms. Heinrich and Pension Boards staff promised to stay engaged and share resources and ideas in the future.